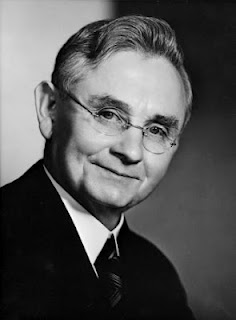 There was an economic recession and New Zealand had a Prime Minister who lacked vision and often made embarrassing pronouncements that had no basis in fact. The government he led responded to a drop in revenue by cutting public spending and public sector staffing was slashed. Unemployment steadily grew and beneficiaries had work requirements placed on them. Family and child poverty became common place, with many families living in substandard housing. Although financial assistance was available for struggling families it was suggested that not all deserved support. Many businesses took advantage of the straitened times by laying off workers and re-employing them under reduced conditions. In the middle of this recession an earthquake hit an urban environment, killing 256 people and demolishing much of the central business area.

Sound familiar? This actually describes New Zealand in the early 1930's, "Honest" George Forbes was the Prime Minister and Napier suffered the earthquake. The government that followed Forbes' was led by Michael Joseph Savage, an Australian with a socialist background.

Savage was appalled at the poverty and inequities of wealth that existed in New Zealand and the demeaning working conditions that prevailed. The government he led took an entirely different approach to the enforced austerity that they followed and the policies that they implemented created a rapid increase in the living standards of New Zealanders and supported economic growth:


To push through his government's changes Savage ignored the National Party's and the Treasury's strident opposition and history has supported the wisdom of his approach.

I accept that this is a simplified history of that era but, despite the differences between then and now (mainly increased environmental concerns), the social themes are similar. I'm sure that if Michael Joseph Savage was alive today he'd be experiencing a pronounced feeling of deja vu. He would also wonder why the National Party (advised by the Treasury) is being trusted to govern and why austerity is again seen as a way to lift us out of recession.

It is interesting to note that Savage described his governing approach as "applied christianity" and coincidentally we have had another New Zealand parliamentarian (with an Australian heritage and a socialist past) ask for a return to Christian values in a popular speech. His Party also convincingly challenges the flawed thinking of the National Government and their Treasury advisors and talks about an alternative future for Aotearoa, New Zealand.

Anonymous said…
It was suggested, a little time, ago that up to 10,000 current State Houses could be sold to their current occupants. So somewhere between 0 and 10,000 houses could be funded and built in places of most need, creating new State Housing stock, and creating much needed employment in each of those areas. Lots of advantages all round, but there must be some negatives?
June 13, 2012 at 7:13 PM

bsprout said…
Can't see many negatives, Anonymous, we are actually losing workers in the construction industry at the moment and there will soon be a huge demand for them in Christchurch. The Green Party has already suggested that we could use the building of state houses to maintain jobs and build the capacity of our construction industry.

There is a huge housing shortage throughout the country and not to meet that need plan ahead for christchurch doesn't make sense.
June 13, 2012 at 7:31 PM

bsprout said…
The last sentence of my previous comment should read: There is a huge housing shortage throughout the country and not to meet that need and also plan ahead for Christchurch doesn't make sense.
June 13, 2012 at 8:13 PM