New Zealand, Slavery and Being a Good Global Citizen 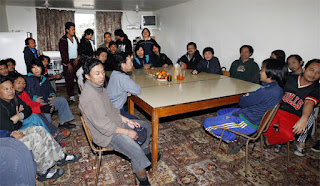 The US can hardly be held up as a bastion of human rights but it is still a concern that their Secretary of State, Hillary Clinton, can release a report naming our country as one of the worst for supporting human trafficking. Not only do we have a thriving industry in underage prostitution but the exploitation of workers on Korean-flagged fishing boats, operating in our waters, has been likened to modern slavery. Clinton's report even documents advertisements for runaway fisherman and likens them to those used for escaped slaves in the 19th century, even including rewards. New Zealand once had the reputation of being an enlightened society that led the world in promoting human rights and social justice and this image has been seriously tarnished. The employment problems within our fishing industry has been known for years and the inaction from both Labour and National led governments has finally caught up with us.

For the last thirty years successive government's enthusiasm for a Neoliberal approach to governance has seen a dilution of regulations and an expectation for the private sector to self manage with little monitoring of safety standards or employment conditions. Even the last Labour Government has to shoulder responsibility for many of our  current problems because they did little to reverse the poor legislation from those they followed. The intention of loosening regulation was to reduce government spending and support the growth of business, however the actual affect has often been the opposite.

Even if you set aside the human cost of dead miners, the working poor, struggling families and child poverty the fiscal ramifications are huge. Around $12 billion will be necessary for putting right the leaking buildings and the health costs to the country because of families living in poorly maintained houses is considerable (David Cunliffe recently revealed that 50% of our state houses are still the ones built by Savage 70-80 years ago). Cutting costs through limiting regulation and cutting social spending may have some short-term advantage but the long term consequences are often substantial.

Pure Advantage identified that around  75% of our exporters are dependent on our clean green image to maintain their international markets and we forget the advantages we have gained by being a world leader in promoting social justice and human rights. We once led the world in giving equal rights to women and our support of child health but this is no longer the case with growing pay inequities between genders and we are now one of the worst countries in the OECD for child health and welfare.

Our state supported protests against nuclear testing and the proliferation of nuclear weapons and rather than diminishing our international status, it increased it. Our position in ANZUS was diminished but in a global sense we were admired for our independent stance and this provided support for our representation on the prestigious UN Security Council. We are currently standing for election onto the UN Human Rights Council, however our current status on human rights may pose problems.

Kennedy Graham recently wrote despairingly about the narrow and blinkered thinking coming from the National Party. They see New Zealand's relationship with the wider world only in terms of trade and gaining economic advantage and ignore the importance and value of being a good global citizen and a world leader in social justice.