Pure Advantage and the Green Race 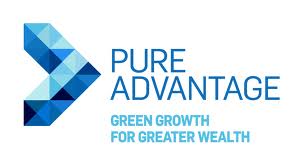 Sir Stephen Tindall was interviewed by Kathryn Ryan on National Radio this morning. Sir Stephen was speaking on behalf of Pure Advantage, an alliance of business leaders who support green growth as best way to ensure and sustain the wealth of New Zealanders. Those involved are notable and influential business personalities and as well as Sir Stephen include Rob Fyfe, Sir George Fistonich, Jeremy Moon, Justine Smythe, Mark Solomon and Joan Withers. This is not a group that can be easily dismissed.

Sir Stephen spoke with some frustration at the lack of foresight shown by successive governments to lead the country in a way that recognizes the importance of our green brand or promote the opportunities that green business can bring.

Pure advantage recognizes that the state of the world's environment and the economic challenges that are being faced mean that business as usual is no longer possible. Most nations are looking at more sustainable ways of operating and there is growing demand for green technology. Pure Advantage assessed New Zealand's international status in their just published report "New Zealand's Position in the Green Race" and it identifies many areas of poor performance:

In the concluding chapter in the Environment for New Zealand 2007 report one important paragraph was removed that existed in the draft:

It is the very aspects of New Zealand’s environment that underpin our economic wealth through tourism and primary production – our iconic flora and fauna, our stunning wilderness areas and our rural landscapes – which are particularly vulnerable to increasing pressures. This is perhaps the critical area where New Zealand differs from other developed countries: other countries do not rely so heavily on the preservation of their natural environment for their economic wellbeing.


What Pure Advantage recognize is the importance of our "clean, green" brand and that around 75% of our businesses are dependent on our environmental image. By ignoring the state of our environment and allowing a steady decline in our position as environmental leaders, we are actually threatening the future viability of our economy. Russel Norman is quite right when he claims "no environment, no economy".


The Green Party supports much that is promoted by Pure Advantage and our Green Jobs election document encompasses a good deal of what PA has included in their Green Race report. The way forward is indeed "green".